With A Possible Historic Bear Market On The Horizon, What Are My Options?  (Part 1) 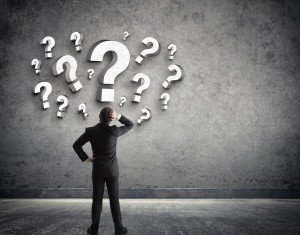 In our prior post (Is This a Bull Market or Bear Market?  Yes!), we discussed the importance of looking at the market from three different perspectives – secular, long term and intermediate term.  We know that although the market is in an intermediate and a long-term bull market, it still resides in a secular bear market that began in 2000.  The secular phase will continue until the debt reckoning process is complete.

As a result, we can conclude once both the intermediate and long-term bull markets transition back to bear markets, all three markets (secular, long-term and intermediate) will once again be aligned to the downside in the same manner as ’00-’02 and ’07-’09.  However, this time, the debt levels underlying the impending bear market are historically high, much more so than even in 2007.  This next bear market should be one for the record books and will likely be followed by a recovery much more tepid than the debt induced slingshot recoveries earlier in this secular bear market; once a debt repudiation process has taken hold, the capacity and tolerance for debt stimulation coming out of it is low.

This brings to the forefront many questions:

What do I do?  Do I stay the course?  Is my advisor prepared?  Should I move all of my money to cash and put it under the mattress?  How about gold?  Should I bet to the downside?  If so, when?   What if it really is different this time, and there isn’t a reckoning process?  What if there is?  When will it happen?

Obviously, the thought of a substantial bear market that could very well be worse than what any of us have seen during our lifetimes is daunting and raises many questions.  Instead of taking the ostrich route, let’s pull our heads up and explore the options.  We will do so in two different posts as we discuss five different options.  In Part 1, we will discuss the first two options, neither of which we would recommend.  In Part 2, we will talk about three additional options we would be more inclined to recommend in varying degrees.

What should we do before, during and after the impending historic bear market?

We are all naturally programmed with normalcy bias; our minds don’t let us process or perceive the possibility of something really bad occurring that we haven’t experienced before or grasp a worst-case scenario.  We go about our business assuming and hoping things will stay as they have been while blocking out negative thoughts and avoiding preparation.  This leads us to our first option:

Option A – Ignore the evidence and stay blindly invested

This is what much of the financial industry and most advisors would recommend you do.  It’s what they’re counting on.  They can’t make money if you move your money to cash or pull it out altogether.  The advice is not based on deceit.  It is simply the result of dependency bias and the default of an uninformed, perpetually bullish vocation.

Hold on…markets do go up over the very long term, right?

That is true.  HOWEVER, markets also go down and stay down for long periods of time as well, especially during these secular reckoning periods.  Understanding we are in one of those periods is critical.  If you are retired, soon to be retired, or will be retired one day, you may want to consider the impact of the timing of an impending historic bear market on your financial future and the emotional toll it could take.

Consider that many times across history, during the same secular reckoning economic phase we are in, markets have eventually gone down as much as 80% to 90% from top to bottom and don’t hit eventual new highs once again until as long as 20 years or more after the bottom.

These are not isolated events.  History is littered with markets that saw these kinds of losses after a secular debt binged economy transitioned into a secular debt reckoning economy.  We are now in the worst debt-ridden economy in history, and a significant amount of debt unwinding is now due.  We don’t know what the future holds exactly this time, but we can reasonably expect the worst.

When you stay dependent on and exposed to markets in this environment, you are putting a potential heavy strain on your portfolio and retirement plans once losses occur.  It takes huge moves and a lot of time to make up for big losses as the table below shows. 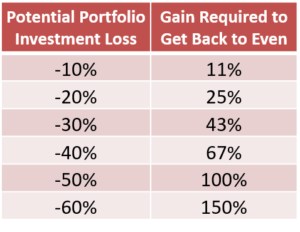 Based on this understanding, we recommend investors not buy into the blind buy and hold/indexing craze that has gripped the investment community, nor should they follow advisors that propagate it.  The market has a way of eventually making the most people look foolish once there are enough people on board; and there are record amounts currently on the indexing/buy and hold train.  The blind buy and hold is a fine investment approach most of the time across the generational economic cycle.  During this phase, however, it will eventually wreak havoc on retirement plans leading to high stress levels and lingering regrets.

Hold on again…you’re just talking about the stock market aren’t you?  Shouldn’t we be fine if we are diversified into different asset classes like bonds and gold?

Diversification is important and generally helpful during basic up and down markets.  However, deflationary forces are the main driving force behind a debt reckoning phase bear market.  As a result, liquidity dries up across all markets, and investors driven by fear opt for cash wherever they can get it, while institutions are forced to sell across all assets to meet cash demands.  This explains why during the heart of the 2008 crisis, every asset class went down substantially.  Treasury bonds were one of the few asset classes that eventually caught a bid and performed relatively well.  However, the outlook for treasury bonds today is not exactly rosy for a myriad of reasons.

Think those tax free municipal bonds are always a safe bet?  Think again.  Municipal bonds are one of the most vulnerable asset classes heading into this next bear market.  Municipalities are barely able to hold their heads above water and meet obligations these days as many cities have filed bankruptcy and watched their muni-bonds go to junk status.  In just the past few weeks, we have learned that Illinois, Connecticut and Maine have defaulted on obligations related to payroll, pensions, and services.  As a result, many muni-bonds in those states have moved to junk status or will shortly.  What was once considered a “safe” investment class is now in serious trouble. Muni bonds have moved down recently, and that is likely just the beginning as the downgrades and defaults begin to pile up.

Advice:  Don’t Ignore the evidence and don’t stay blindly invested in an approach dependent on the markets and reliant on hope.

Option B – Place your bets on the downside

Hopefully most of you are long term investors and wouldn’t consider speculating on the direction of the market.  We can throw all the evidence at you about how vulnerable the market is, but it doesn’t mean it’s going to the dogs tomorrow or next week or even next year.  Who knows what the market has planned for us and when?  We can only weigh the odds, look at history and draw conclusions.

One unwavering conclusion we can make from observation and maybe a little personal experience: speculating on market direction is a fool’s game.  Even if you are occasionally right, your successes will lead to your downfall just like the gambler who is most likely to lose the most in the end after he was wildly successful in the beginning.  Invincibility does not endure in gambling, and it does not endure in market speculation.

Advice:  Don’t try to time the market and make a killing when it goes down.  As the saying goes, markets can stay irrational longer than you can stay solvent.

We would highly suggest that investors stay clear from both Options A and B in this current environment. Please stay tuned and keep an eye out for Part 2 as we explore three other alternatives for you to consider during what we would consider a critical time for investors.